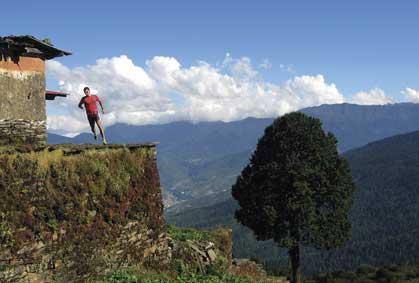 The writer running through Phajoding Goenpa.

The snarling yak-herding dog tore within the mossy ravine and skidded to some halt around the opposite bank. Black dirt oozed through its Yeti-sized front paws when i backed into dripping wet ferns lining a sparsely trodden footpath. My friend Sangay’s advice exhibited through my thoughts: “No. No trail there. You take road.” The next time, I’ll listen. A litter-thrown trickle of the creek was everything now separated me from the drooling mutant mastiff, bred for that sole reason for protecting yak herds from bears, thieves and, possibly, trail runners.

My next make an effort to run Thaptsa Peak would hopefully be—as the Bhutanese say—more “auspicious.”

I’d just showed up in Bhutan and begun teaching therapy students in Thimphu, the compact capital of 100,000 people. Occur a narrow valley drained through the glacial runoff from the Wang Chuu, the town includes a busy, cozy feel. Like a physical counselor with Health Volunteers Overseas, I’d be living and dealing in the National Hospital for five several weeks.

While I’ve been working abroad, running has always proposed a far more intimate look at a location and it is culture. When I held class in the new hospital building in Thimphu, attention was constantly attracted the window to the high ranges encircling the town.

There has to be trails here, I figured. A land in which the king rides a mtb and also the tallest peaks remain unclimbed, Bhutan is determined through the thick, impenetrable mountain tops which have isolated and guarded this kingdom for hundreds of years. The contour lines of Buddhist Himalaya pulled me along with promises of exotic singletrack. I thought a karmic feeling of responsibility to trail runners everywhere.

Funny factor, the Bhutanese aren’t big on adventuring. They have just to walk hrs towards the nearest road and individuals wandering the wilds achieve this with purpose—to hang prayer flags or herd yaks. Staying away from jaguars also takes main concern. Like a non-Buddhist missing yaks, I discovered reliable trail beta tough to find. Undeterred, I spent several weekends doing short recon runs, as well as befriended a monk acquainted with our prime country.

Eventually, plans for any 25-kilometer run required shape. A brutal ascent from the west side from the valley would ease to contouring south along ancient trade routes, linking a number of remote goenpas, or monasteries. Four 1000 ft of climbing culminated on the ridgeline scramble towards the 13,200-feet Thaptsa Peak. I’d start in the well-known Druk Path trailhead and finished in the giant golden Buddha perched in Kuenselphodrang Nature Park, with creative route-finding filling out the gaps. Sangay imparted his pre-run advice: “Call to yak herders in one kilometer out. They connect dogs.” I took in this time around.

Clinging towards the eaves of Wangditse Goenpa, a golden dragon welcomed the beginning having a wrathful grin. Standing alone in the trailhead over the quiet monastery, I drawn on into my astrologic intuition and all sorts of signs pointed toward an auspicious morning. Vertical white-colored prayer flags hung limp when i started dodging frosty cow pies, lung area burning in the uphill effort. Thickets of blue pine rang with playful orange-crested birds—hoopoes! 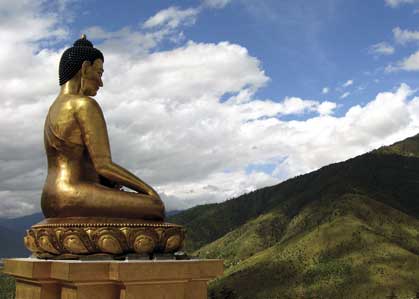 Steeper yet, the path switchbacked over a preserve attaching a little herd of Takin, the nation’s animal. (Think awkward, small zoysia using the mind of the hairy manatee.) Deeming captivity inside a zoo to be really united nations-Buddhist, the 4th king had tried to free them years back, however they drifted downtown inside a domesticated trance.

A rapid snort and rustling jolted me to wide-eyed attention as something resembling a furry table went crashing with the underbrush. Wild boar. I had been slightly on edge, considering someone back in the hospital who had been dealing with a panic attack with a territorial bear near his village—potentially a very good reason to reconsider my usual unarmed policy while trail running. “I stabbed bear 3 times with short sword,” boasted the brave survivor, white-colored tendon still visible through his bear-bitten feet. I ran on, having a lengthy-held delusion which i was Bear Grylls of individual versus. Wild, able to fashioning ammunition when needed.

After 3000 vertical ft reduced my pace to some spirited hike, I plugged upward through thick rhododendron forest, eventually reaching Phajoding Goenpa. Perched around the hulking slopes of Skeleton Mountain, a number of temples and meditation huts sitting ethereal and forgotten.

It had been here’ had first happened upon Namgay, the resident lama, on the previous scouting hike with my spouse. He’s a 21st-century monk having a mobile phone today, we’d arranged a mid-run tea break. Over hot butter tea he spoke about Zhabdrung, the founding father of Bhutan, who’d declared these lower Himalayan valleys the menjong, or medicine forest. I loved it were built with a more soothing ring than “bear-mauling forest.”

My fears allayed, Namgay sent me off past a basic pond lived on through the deity Shingjong Wangmo. Literally meaning “powerful female who protects the area,Inches Shingjong Wangmo may be the perfect running partner. I possibly could hear several novice priests back at Phojoding laughing lengthy after I’d been surrounded through the dark fir forest. 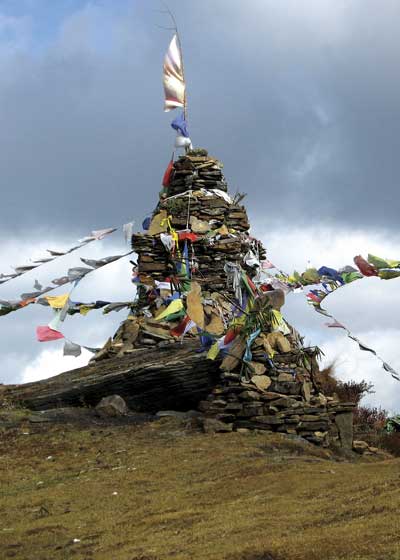 This chorten marks a pass on the way to Thaptsa Peak.

Soon, pastures blended into aromatic hemlock and pale bamboo groves. The run required with an unscripted nature of their own, propelled through the satisfying spring of untrodden pine needles. I imagined myself an smart pioneer clad in neon athletic shoes, forging through uncharted backwoods. Just above treeline the path emerged in a solitary structure, the lonely and delightful Pumola Goenpa, its crumbling white-colored brick walls lifting a bronze bell in to the moody sky. Having to pay me a maximum of a respectful nod, crimson-robed priests worked out crushing juniper incense.

Thaptsa Peak was now around the corner. Uncovered and wind raked, the approach snaked through a number of rocky outcroppings, the plant life colored shades of ochre and dying eco-friendly in the hard October freezes. When I crested the grassy summit, snowy peaks from the Himalayan crest sailed around the horizon—a fitting reward for aching quads and seared lung area. Amongst hard-earned silence and thin gulps of air, the immense flank of 24,000-feet Jumolhari would be a sobering indication that I’d absolutely spent myself managing a foothill.

Bizarre local legend informs of the demon in human form, secretly decapitating his subjects to create mind-stew inside a locked cauldron. As whispers of his macabre habit spread, he required the mountain tops be slashed lower to higher gaze on his lover within the adjacent valley. The traumatized villagers rather made the decision to lop from the madman’s mind and spare the mountaintops. Great news for trail runners. When it comes to cauldron, it’s stated to become hidden at Wangditse Goenpa–precisely where my run started.

Auspicious? I believe so.

This story initially made an appearance within our October 2013 issue.